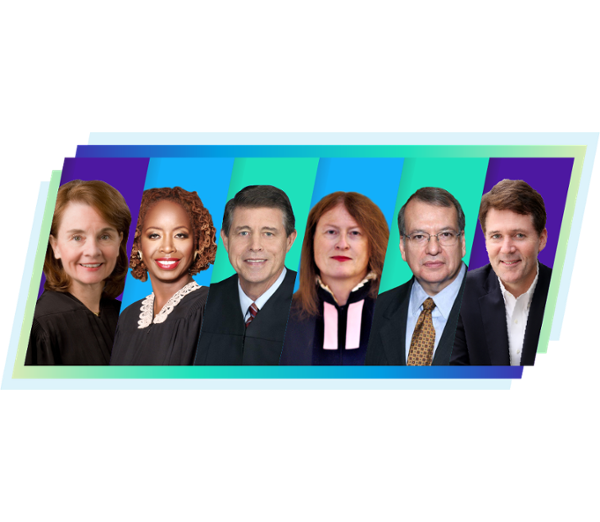 As their courtroom anecdotes revealed throughout this year’s Judicial Panel at Relativity Fest, our panel of judges have not seen the COVID-19 pandemic slowing down justice in their courtrooms—but they have gathered some interesting takeaways for litigants navigating the legal system in 2021.

Our panel for this year’s session included many esteemed jurists:

The judges shared their insights on how the legal world has kept on turning over the last year, including current trend around sanctions; how involved judges can and should be in parties’ discovery disputes; and what litigating looks like in this stage of the pandemic.

Read on for some highlights, and visit the Relativity Fest event platform to view the recording while you still can.

In Avista, put simply, the judge got tired of counsels’ inability to schedule depositions. The ruling declared a last-ditch effort to get something on the books, in which the lawyers—each accompanied by a paralegal, as witness—would engage in a game of rock-paper-scissors. The winner chose the location for the deposition in question.

In Arizonis, another discovery deadlock left the judge to prescribe a similar resolution: “Unfortunately, rock-paper-scissors involves human variables, rendering it less than ideal. In this court’s view, the use of coin flipping will serve.”

Did these rulings go too far? Or was this level of judicial instruction necessary to keep things moving forward?

For her part, Justice Kennedy said: “I think judges should play a limited role in discovery, becoming involved to the extent of ensuring each case proceeds in a timely manner.” Most of the panel agreed—more or less.

Speaking from across the pond, Master McCloud quipped: “I’ve never had a situation where I’ve had to toss a coin; I think one could use paper scissors rock to just resolve the case in that event!”

However, she went on to acknowledge, “Judges here [in England] can be very involved in the details of e-disclosure disputes,” including herself: “I remember one case where the search terms involved ‘a cup of tea’—very English and very appropriate, I thought, for a case involving a politician. ”

Judge Fischer, who has in years past emphasized the importance of proactive prescription from the bench when it comes to discovery, had some perspective as well.

“We all take to heart in the western district our role as case manager,” she explained. “To that end, case management conferences in our court tend not to be flybys. Judges ask about the case, key players, et cetera, and counsel should be prepared for that.” This type of level-setting helps prevent disputes from occurring in the first place, which the judges agreed is a best-case scenario.

Still, Judge Rodriguez noted that judges should avoid doing too much of the thinking for litigants: “The problem may be, do we start putting thumbs on the scale? Do we introduce areas the parties haven’t thought about?” It’s a dangerous line—and shouldn’t be crossed.

“I’m always a little concerned about that. I don’t want to direct parties,” he continued. “Often, during my Rule 16 conferences, first-time lawyers are in court and I notice they’re writing frantically as I’m making inquiries—as if I’m introducing new topics. I always pause, thinking, ‘God, am I talking too much?’”

In agreement with this caution, Judge Matthewman proposed an interesting analogy to help guide jurists.

“There should be no babysitting and no hands off provision. You want to have the porridge just right,” he cautioned. “I’m inclined to very quickly deal with a discovery dispute almost like a cut on the finger—if you let it go and don’t treat it, it becomes infected and you have to go to the hospital. But put on a little Neosporin and a Band-Aid, and it’ll go away.”

“You heard it here first,” David announced in response. “Ladies and gentlemen: the Neosporin doctrine of discovery in federal courts.”

Next on the session’s agenda was an updated look at sanctions in the current discovery and disclosure landscape. As David noted, this topic has evolved significantly in recent years—particularly with rule changes and theories on how they might come into play.

So what’s going on right now?

First up was a case involving a 256-page sanctions order issued over “a series of missteps, misdeeds, and misrepresentations” related to e-discovery. Another, United States v. Brace, also involved abundant discovery issues that the court thought “flout[ed] court rules at [the litigant’s] peril”—resulting in a summary judgment.

Judge Fischer took attendees through a deep dive into what it means to issue the “nuclear option” of sanctions, and how jurists come to that decision (hint: it isn’t done lightly).

We have to go through some factors before we issue sanctions to determine if the nuclear option is warranted. And this judge did that, and found it justified. There may be those instances when a nuclear option (the dismissal of a case, in part or in whole) is warranted, but in order for it to stand, it needs to be documented what happened vis-à-vis attorney and litigant. … When you look at these things as a judge, you need to step back and look to see it from every side. Imposing a sanction, especially a dismissal, puts reputations, rights, and justice at stake. So it should be a serious decision.

The panel also discussed another hot e-discovery topic of the day: biometrics data. Is it discoverable? Is the potential intrusion on privacy warranted?

“The discovery of biometrics will depend on whether material is relevant,” Justice Kennedy stated in summary. “And let me just say this: in all these disputes, it’s about using common sense, being practical while following applicable law, and using cooperation.”

Judge Rodriguez elaborated: “When people challenge Fitbits and other devices, it’s often, ‘these aren’t reliable.’ So is it relevant? Is it proportional? Is it admissible? If it’s going to be important enough, you need to think about what experts you need to challenge reliability prong.”

Courtroom (or Court-Zoom) Life in a COVID World

And finally, never a group to shy away from what’s most top-of-mind for Relativity Fest goers, David Horrigan invited this year’s judges to share their honest perspectives on how adjusting to COVID-19 precautions has affected their courtrooms.

Justice Kennedy, discussing the differences between virtual and in-person interactions—both for litigation and for community recognition, such as welcoming ceremonies for new lawyers—shared an important lesson for us all: “There is just nothing like the personal touch.”

Her colleagues largely agreed, although many were also reassured by the ongoing productivity of their communities throughout the pandemic.

“We’ve been extremely busy,” Judge Matthewman observed. “I think there’s been a silver lining to the pandemic: we’ve been forced to adopt technology we never would’ve before.”

Acknowledging the ever-changing nature of this COVID world, Master McCloud noted that “it’s changed a lot over the course of the pandemic. Initially we scattered and worked entirely remotely via Zoom or phone hearings, and made the best of it on very quite short notice. I was in my kitchen with a backdrop of books—people thought I was very learned,” she said.

“I did have one hearing I stopped halfway through, where there were no lawyers involved, and we had allegations of abuse; one party was afraid of looking at another, that one insisting on being looked at because of a disability—the whole dynamic was wrong,” Master McCloud continued. “I called it to a halt in favor of saying ‘come back when we’re physically in court.’ But with lawyers involved, it’s working very well.”

And, on the plus side, she observed: “One side effect for remote hearings is great press attendance, as it’s quite easy to invite them into a meeting. So press access is more extensive, ironically, than it might normally be.”

Judge Fischer echoed this experience: “I have also had increased press attendance. They’ll reach out to chambers and my clerks will give them the Zoom links, and instruct them not to participate by speaking, and they’ve complied with that well.”

For Judge Rodriguez, it’s all been about balance.

“It’s basically worked, but I don’t think it’s worked on everything; I haven’t had as much success on evidentiary hearings as others have had,” he said. “I’ve requested in-person appearances in some cases. I had a motion to dismiss related to a case where I could see that a law enforcement person was lying, and I don’t think I could’ve detected that in Zoom.”

But, another silver lining? “It’s caused us to think about new and creative ways to bring in witnesses,” Judge Rodriguez went on. “I’m waiting for a hologram—I want to see a hologram in the courtroom soon.”