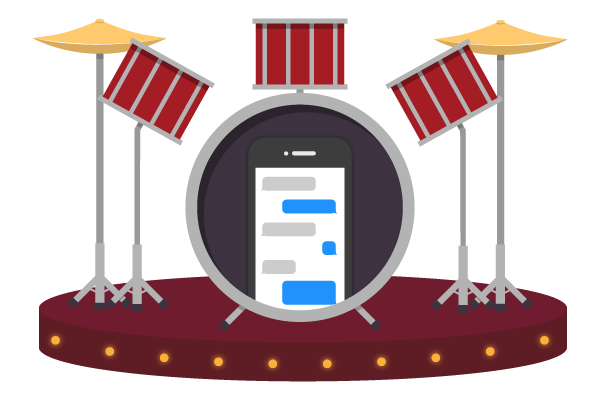 With hits such as Free Bird and Sweet Home Alabama, Lynyrd Skynyrd was one of the biggest bands of the 1970s. Tragically, members of the band met the same fate as other airborne rockers when they were killed in a 1977 plane crash.

After the crash, surviving members of the band took a so-called “blood oath” that they would not perform under the Lynyrd Skynyrd name. However, in 1988, the survivors entered an agreement where they could use the name in certain circumstances.

Nevertheless, litigation ensued when Lynyrd Skynyrd drummer Artimus Pyle attempted to participate in a Hollywood film about the band. Of course, in 2017 it’s difficult—if not impossible—to conduct litigation without e-discovery.

Named for Leonard Skinner, their very strict teacher at Jacksonville, Florida’s Robert E. Lee High School, Lynyrd Skynyrd skyrocketed to music fame in the 1970s, with multiple hits making them one of the more popular rock bands of the decade.

The band departed on a flight from South Carolina to a gig at Louisiana State University, but they would never make it to LSU. A mechanical malfunction caused their plane to run out of fuel and crash in Mississippi.

Shortly after the crash, surviving band members and the widows of Van Zant and Gaines agreed to a so-called “blood oath,” in which they all agreed not to perform under the name Lynyrd Skynyrd.

However, in 1987, to commemorate the tenth anniversary of the crash, surviving members reunited for a Lynyrd Skynyrd tribute tour. Sadly, it wasn’t Sweet Home Alabama. It was a house divided by litigation.

During the tribute tour, the survivors and the heirs could not agree on the use of the name, Lynyrd Skynyrd, and the dispute resulted in litigation. In 1988, Ronnie Van Zant’s widow, Judy Van Zant Jenness, sued various survivors, including Lynyrd Skynyrd drummer Artemis Pyle, but the various parties agreed to a consent order, controlling the use of the name and other aspects of the band’s likeness and intellectual property. Although Pyle later testified things became “copacetic” among the parties, when he signed the consent agreement, he wrote “under protest” next to his signature.

The 1988 consent order included provisions on how the name Lynyrd Skynyrd could be used. For instance, to reduce the likelihood of confusion with the original band, the parties were to insert the year with the name, so the band playing this year would be, “Lynyrd Skynyrd 2017.”

Noteworthy for the current dispute, the consent agreement provided that the parties could not use the name Lynyrd Skynyrd or the likenesses of Van Zant or Gaines except as provided in the agreement.

From Free Bird to Street Survivor

In early 2016, Cleopatra Entertainment, an affiliate of Cleopatra Records, began working on a feature film entitled Free Bird about the 1977 plane crash. They made Lynyrd Skynyrd drummer Artemis Pyle part of the project, giving him five percent of the net profits and a co-producer or consultant credit.

In July 2016, Lynyrd Skynyrd survivors and heirs sent a cease and desist letter, arguing the project violated the 1988 consent order.

Cleopatra countered that it was not a party to the 1988 consent order and that it had a First Amendment right to make the film. The Lynyrd Skynyrd survivors and heirs sued in May 2017 to block the release of the film, now entitled, Street Survivor: The True Story of the Lynyrd Skynyrd Plane Crash.

In response to the suit, Cleopatra sent Pyle a letter modifying his contract for the film, limiting his role to “historical consultant” in an attempt to avoid the provisions of the 1988 consent order.

Pyle communicated extensively via text with Jared Cohn, director and screenwriter of the film. The survivors and heirs sought Cohn’s texts with Pyle, but—as we’ve seen in cases such as Deflategate—Cohn’s texts were lost when he got a new phone.

The survivors sought an adverse inference instruction on spoliation of the text messages under Fed. R. Civ. P. 37(e) or the court’s inherent authority.

Referring to the language of the new version of Rule 37(e)—but not mentioning the rule change—the court cited pre-2015 case law, such as Zubulake v. UBS Warburg, LLC, to establish the duty to preserve and other cases to define spoliation—“the destruction or significant alteration of evidence, or the failure to preserve property for another's use as evidence in pending or reasonably foreseeable litigation.”

Cleopatra argued it could not be sanctioned for the actions of Cohn, a non-party, who allegedly lost evidence that was not within Cleopatra’s custody or control.

The court rejected Cleopatra’s custody and control argument, holding that courts have construed “control” broadly, citing In re NASDAQ Mkt. Makers Antitrust Litig., for the proposition, “Documents are considered to be under a party's control ‘if the party has the practical ability to obtain the documents from another, irrespective of his legal entitlement.’"

In granting the survivors motion for an adverse inference instruction, US District Judge Robert Sweet noted that Cohn managed to save photos from his old phone, but not the texts. The judge said saving photos but not the texts provided “evidence of deliberate behavior that sanctions are intended to prevent.”

The judge also blocked release of the film because of Pyle’s participation in it.

Just as Tom Brady discovered in Deflategate, the Lynyrd Skynyrd defendants learned that if you have a reasonable anticipation of litigation, and your responsive text messages get wiped when you get a new phone, bad things will happen to you.

Sure, the most severe sanctions are tougher to get after the 2015 e-discovery amendments to the Federal Rules of Civil Procedure, but the Lynyrd Skynyrd matter shows litigants can still get them.

Having said that, there are legal and factual points worth noting about how the court decided an adverse inference instruction was appropriate the Lynyrd Skynyrd case.

First, the court cited the language of the new Rule 37(e), but also cited case law interpreting the pre-2015 law of sanctions.

Over the past two years, we’ve seen some litigants and courts cite the old rule as well as case law interpreting the old version of the rule. Of course, for cases filed before December 1, 2015, courts have discretion on which version of the rule to use. However, now that we’re almost two years into the new rules, we anticipate we’ll see less reliance on the old version and on pre-December 1, 2015 case law.

Second, as we noted above, in assessing sanctions, the court believed that saving photos but not saving texts demonstrated “evidence of deliberate behavior.” However, with some mobile phones and carriers, preserving photos and preserving texts are completely different procedures. It’s entirely possible that a layperson could transfer photos without transferring texts—without any nefarious intent. It’s yet another example of the challenges of e-discovery in a mobile world.