When it comes to reviewing images in e-discovery, case teams often spend hours clicking open each attachment to see if the image is relevant—or just another company logo. RVM knew that there had to be a faster, more efficient way to find important images. With that in mind, they built Snapshot on Relativity and used it to cut image volume by 95 percent and save their client close to 100 review hours.

RVM’s client was facing a lawsuit over the effectiveness of posted disclaimer language. Their client was tasked with demonstrating that they properly posted appropriate signage language. To achieve this, they had to review hundreds of thousands of documents, including many photos, of the signage at question.

They turned to RVM to help them organize the information.

“This case presented a unique challenge as images, specifically of disclaimer language, would be responsive to the matter,” said Chief Technology Officer Geoffrey Sherman. “Images are cumbersome to review and if they are voluminous, they will substantially increase the overall time of a document review.”

Ultimately, there were approximately 40,000 inline images included in the review.

Analyzing images is no easy feat; it takes time and a good amount of manual work.

“Images do not lend themselves to sorting or traditional analytics,” Geoffrey said. “Identical images may appear many times within a workflow. But review teams can’t easily bulk tag them—making this a time-consuming project.”

Geoffrey noted images typically fall into two categories: substantive or nuisance. Unfortunately for review teams, there is no seamless way to make this distinction. They must click into each file to confirm the image’s category.

For 40,000 images, the hours spent looking at images would stack up.

“There were all kinds of images to analyze," Geoffrey said. "There were pictures on consumers’ phones, marketing photos, and everything between.”

With a cost-conscious client, the typical way of reviewing images was far from ideal.

“We needed to determine at a glance if an image was a food menu or something irrelevant, like an email signature,” Geoffrey said. “We wanted to focus our efforts on quickly finding the important images. So we went to the drawing board.”

RVM aimed to review images in the same way people look through pictures on their camera roll.

“People can swipe through photos on their iPhones in seconds,” Geoffrey said. “We wanted to build something that offered this experience for reviewing images.”

RVM’s development team made this idea a reality by leveraging the tools available to build on the Relativity stack. Their application, Snapshot, compares images by hash value and groups images with the same hash value together.

While other solutions have this capability, they require reviewers open at least one image before coding that group. Snapshot is unique in that it displays thumbnail-sized renderings of the images into the Relativity Document list views. In other words, reviewers can look at images at a glance without ever opening them. 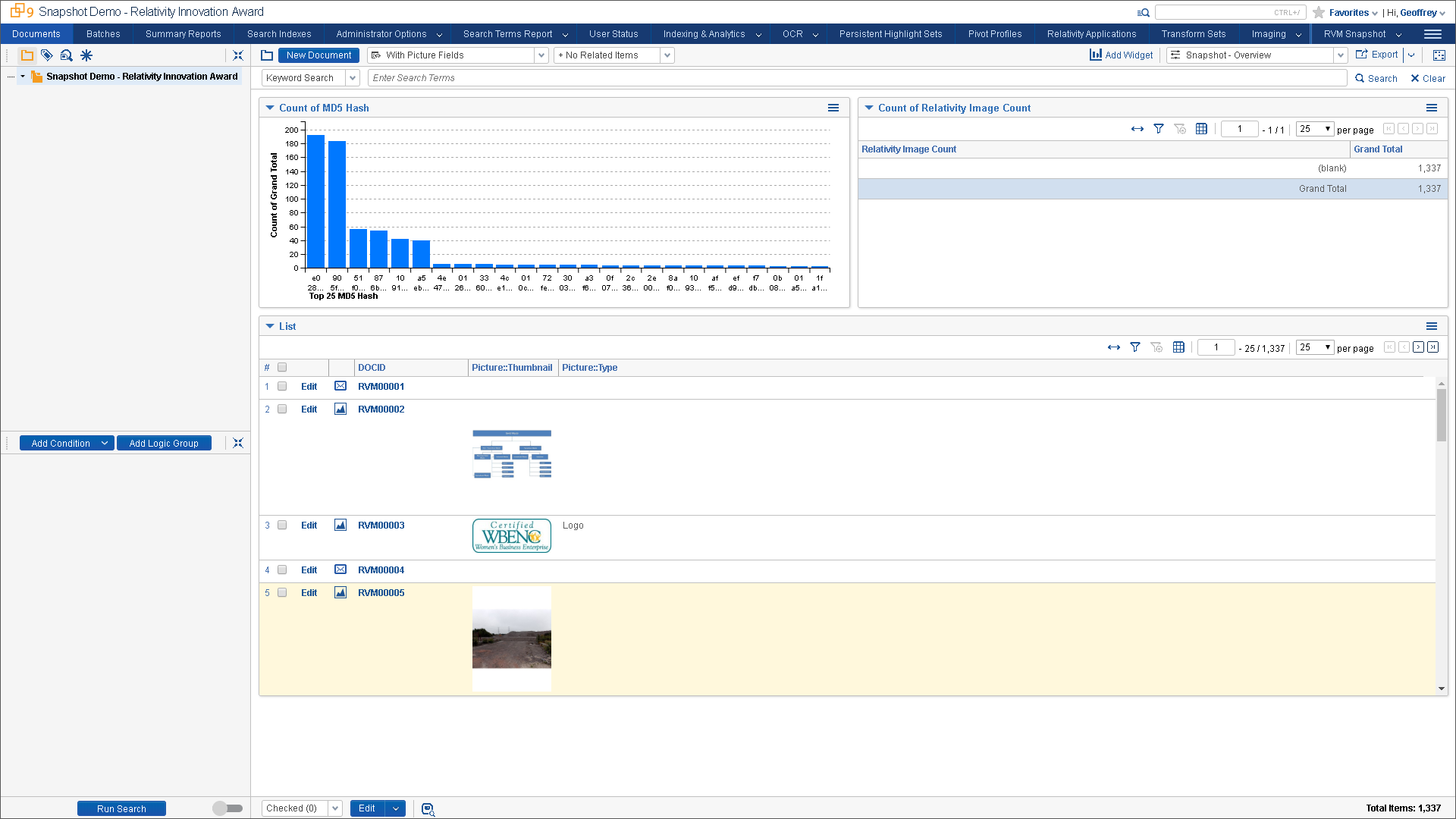 Once the review team coded a thumbnail image as relevant, Snapshot propagated that decision to its duplicates.

“We relate Snapshot to an early case assessment tool. We go in, categorize images, and then take some action on the image after that,” Geoffrey said. “This way, we focus on the substantive images faster.” 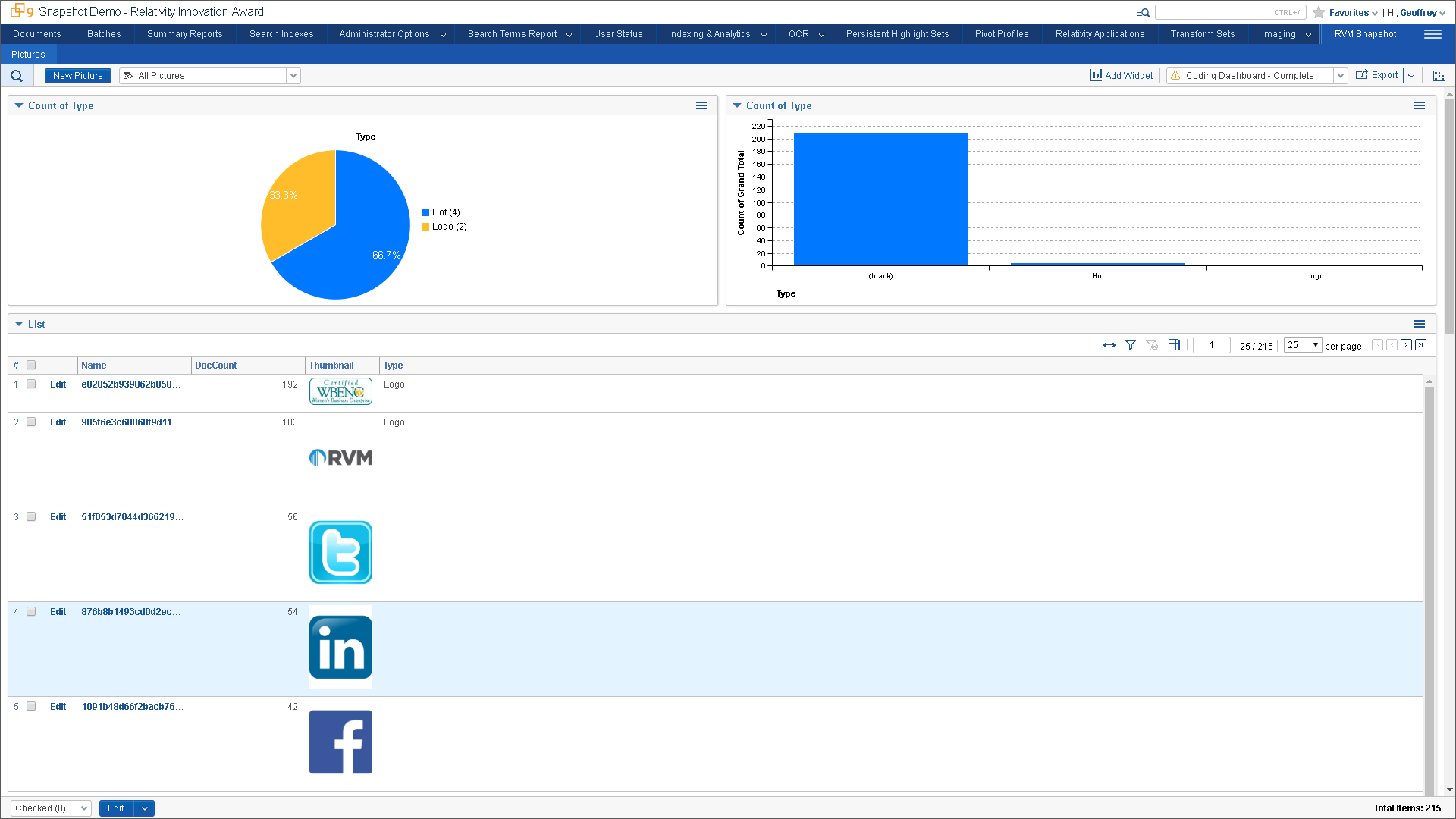 With Snapshot, one attorney completed the image review in six hours. The traditional way of reviewing each image would have taken an estimated 100 hours to complete, according to Geoffrey.

“With Relativity, we built a tool that takes a basic approach to development and brings a lot of value,” Geoffrey said. “Snapshot resonates with people who tackle image-heavy reviews. It simplifies a traditionally tedious process and makes their lives easier.”

“With Relativity, we built a tool that takes a basic approach to development and brings a lot of value. Snapshot resonates with people who tackle image-heavy reviews. It simplifies a traditionally tedious process and makes their lives easier.”

RVM has been the preferred provider of e-discovery and consulting services to leading global corporations and Am Law 100 firms for twenty years. RVM’s experienced professionals can assist around the world, across industries and in both the private and public sectors. RVM is proud of receiving certification as a woman-owned business.