5 Years of Adventures in Data Law: 100 Horrigan Posts and Counting 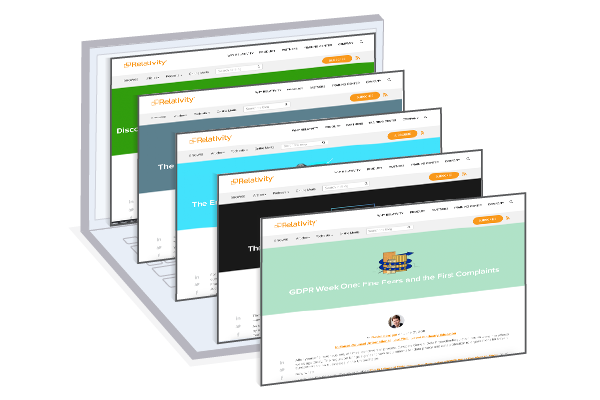 Today’s piece marks the 100th post for this author on The Relativity Blog. We began this adventure in data law over five years ago with the May 2015 post, Discovering Deflategate: What Tom Brady, Gisele Bundchen, and the NFL Can Teach Us about e-Discovery.

Over the years, we’ve visited a veritable cornucopia of topics in e-discovery, data privacy, data protection, and all aspects of data law. These have featured litigation involving Taylor Swift, Superman, celebrity sushi, PF Chang’s, Donald Trump, and many more.

We’ve covered courthouses and conferences while attempting to illustrate the important roles e-discovery and data privacy play in everyday life.

Data law—especially e-discovery—has often been seen as … well … mind-numbingly boring. To provide a service to the Relativity community, we’ve tried to make data law fun—because if something is interesting and fun, you’re more likely to take away something from it.

With that in mind, let’s look back at some of the more memorable moments from these first 100 posts.

Social media has been one of the biggest issues in e-discovery and data privacy in recent years, and we’ve been fortunate to have industry experts join us at our Legal and Industry Education tracks at Relativity Fest, Legaltech at Legalweek, and ILTACON.

We started a tradition of capturing these pearls of wisdom in February 2016 with The Best of Legaltech 2016: Our Favorite Quotes from the Speakers. Among the social media suggestions:

“Don’t do anything on social media if you’ve had more than three drinks.”

We continued the tradition at ILTACON with The Best of ILTACON 2016, where the social media tips continued:

The Late, Great Cheryl Disch, who, before she passed away, was an ILTACON Co-Chair and Senior Manager at Duane Morris LLP:

“Social media writing is not business writing—don’t use ‘OMG’ in business correspondence.”

In addition, the past five years of case law gave us more social media law guidance.

In Facebook, School Bullying, Bad Lawyering, and Rule 37 e-Discovery Sanctions, we learned that—in the Second Circuit—one might be able to make the argument that a deficient discovery production wasn’t a party’s fault because it was the lawyer’s fault. Unfortunately for the plaintiff in D.O.H. v. Haddad, he was in the Seventh Circuit, and he got sanctioned because—in the Seventh Circuit—the “Lawyer Ate My Homework” argument doesn’t fly.

In our 2016 Case Law Update: Trends from Our ‘2015 Case Law Year in Review’, we learned that there are limits to what prosecutors can do with what Ed McAndrew called “Special Agent Facebook and Special Agent Instagram.”

In Disciplinary Counsel v. Brockler, a prosecutor’s attempt to flip a witness backfired when he attempted to shake an alibi witness by creating a fake Facebook account and creating a ruse that the defendant was cheating on the alibi witness in an illicit affair. The prosecutor was fired and received a one-year stayed suspension.

Women and the Law

Of course, with our conference quote compilations, we could not leave our very own Relativity Fest out of the fun, and we continued in 2016 with The Best of Relativity Fest.

The changing role of women and their rising influence in the legal profession was a big theme at Relativity Fest 2016:

“Going to law school was a decision that increased my income—because I met my wife there.”

“I had to put my neck on the block to get TAR approved, but that's how you make new law.”

Honorable Nora Barry Fischer, U.S. District Judge, (W.D. Pa.), when I asked her what she would do if a litigant such as the one in Arrowhead v. Seven Arts blamed his deficient e-discovery production on the “girls” in his office:

“This girl would have a dialogue with that attorney—and then some.”

Judge Fischer isn’t the only woman to make a judicial impact on e-discovery law. In The End of an e-Discovery Era: Judge Scheindlin's Law from Zubulake to Today, we looked back on the career of Judge Shira Scheindlin on the occasion of her retirement from the bench. From Zubulake to Pension Committee to stop-and-frisk, Judge Scheindlin has had a profound effect on the law—and no, she’s not related to Judge Judy. (For those who look closely, Judge Judy spells her name differently.)

Speaking of judges, we’ve been honored to have some of the most esteemed judges in e-discovery law grace our pages.

Judge Conti will be joining the Judicial Panel this year, and we’ll also welcome Master Victoria McCloud of the High Court of England and Wales.

Justice Vickery gave us insight into the differences in international sanctions for discovery abuses in the Best of Relativity Fest post for 2017:

Honorable Peter Vickery, Justice, Supreme Court of Victoria, on Australia’s spoliation sanctions—compared to the sanctions in Mueller v. Swift (the Taylor Swift case), where multiple devices were destroyed, including a MacBook felled by a coffee spill.

“We would have thrown the coffee-spiller in jail.”

Judges Fischer, Peck, and Rodriguez have been speakers at every Relativity Fest since 2014, with Judge Fischer and Judge Rodriguez having served on every Judicial Panel.

Judge Peck served on the first five Judicial Panels, and—whether it’s with his Peck Poll or his calls for cooperation in e-discovery—he remains one of the stars of Relativity Fest. After Judge Peck’s retirement from the bench and move to DLA Piper, he graduated to serving as a judge on Relativity Fest’s State of the e-Discovery Union.

The judges have given us practical knowledge we can use at work every day.

In The Best of Relativity Fest 2019, we received some of that practical advice from the bench:

“There’s no such thing as a good privilege log. If a judge has to see it, it’s not good.”

Once again, the case law gave us guidance. Combining judges and social media, in our 2017 Year in Review, we covered Law Offices of Herssein and Herssein, P.A. v. United Servs. Auto, Ass’n, which addressed the question: Is a Facebook friend really a friend? Can judges be Facebook friends with lawyers and litigants appearing in their courts?

Data privacy and data protection have been among the most important and popular topics over the past five year and 100 posts.

Europe’s General Data Protection Regulation (GDPR) has been a big topic, and the effect of the regulation has been profound.

Of course, we’ve had some helpful privacy tips and observations on these pages over the years:

“Data privacy is a personal cost-benefit choice that we all make. However, if you’re using your face to open your phone and also sending pictures of your face to a Russian face app, then I don’t know how to help you.”

“In the United States, your Social Security number has more privacy protection than you do.”

Johnny Lee, principal and national practice leader at Grant Thornton, gave us some good advice on dealing with those regulators:

“Crossing a regulator is like living with an angry in-law.”

Amie Taal, CEO and Founter, Strategem Tech Solutions, and, at the time, VP of security and investigations at Deutsche Bank, on differing views of data privacy:

“Europeans are very anal—in a good way—about data privacy. It’s sort of like the way Americans feel about guns.”

We could spend all day recalling the words of wisdom from the e-discovery community over the past five years, but you can find all 100 posts and future posts here. In addition, there are many great writers on The Relativity Blog, and you can subscribe to receive each new post in your inbox here.

We’ll leave you with some thoughts on why we do what we do and how lucky we are.

James Sandman, President Emeritus of the Legal Services Corporation has spoken at Relativity Fest on multiple occasions, and he’s reminded us of the importance of access to justice: “In the United States, there is less money spent on civil legal aid than the amount of money spent on Halloween costumes … for our pets.”

Kelly Twigger of ESI Attorneys and E-Discovery Assistant told us that “to make cooperation work in e-discovery, stop being lawyers and start being humans.”

Why These 100 Posts Matter

When we started Relativity’s legal and industry education program five years ago, Andrew Sieja told this author our mission should be to give something back to the e-discovery community that has given so much to us.

Sure, we’d like you to become part of the Relativity community—but we provide free continuing legal education not for an opportunity to sell from the podium, but to give back to this innovative and forward-thinking field. And yes, we hope you go away thinking, “These guys are good people, they just gave me free CLE, and they know their stuff.”

As he often does, the Honorable James Francis IV, retired US magistrate judge and mediator at JAMS, leaves us with an important reminder about what our goals should be. At Relativity Fest 2019 he said:

“Those of you in this room are the most knowledgeable people in a cutting-edge area. With knowledge comes power, and with power comes great responsibility.”